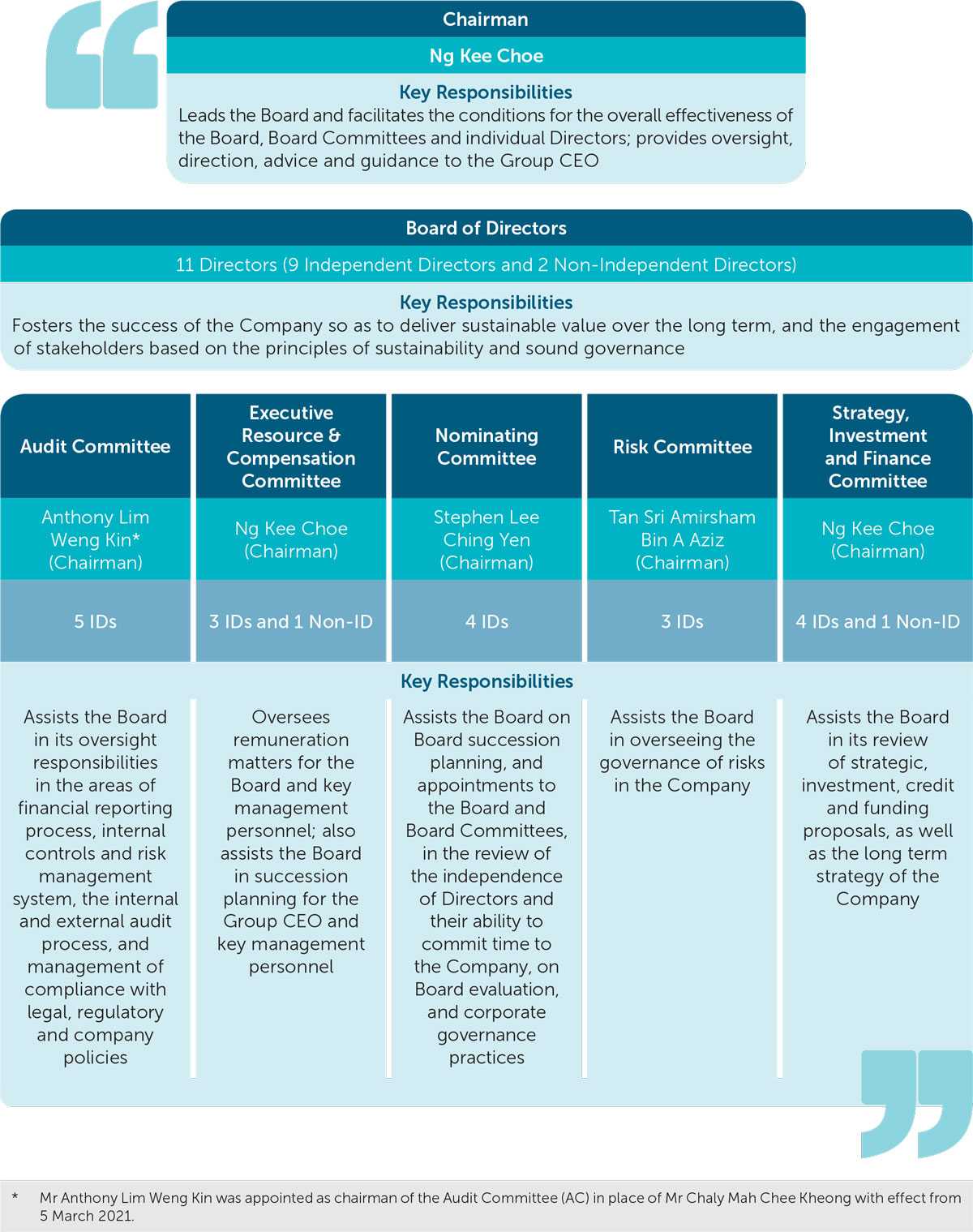 CapitaLand Limited (the Company and, together with its subsidiaries, the Group) embraces the tenets of sound corporate governance including accountability, transparency and sustainability. It is committed to enhancing value over the long term to its stakeholders with the appropriate people, processes and structure to direct and manage the business and affairs of the Company, achieve operational excellence and deliver the Group's long-term strategic objectives.

Our values, ethics and practices provide the foundation for a trusted and respected business enterprise.

The Board of Directors (Board) is responsible for and plays a key role in setting the Company's corporate governance standards and policies. This sets the tone from the top and underscores its importance to the Group.

The composition of the various Board Committees after AGM to be held on 27 April 2021 is set out in the table below.

In addition to Board Committees, the Company has also established the CAP in 2014 and the CTC in 2015. The CAP shares strategic insights on general, economic and real estate industry developments and trends in China. The CTC apprises the Board on technology developments and initiatives, in particular those that are relevant to support the Company's efforts to harness technology in its business operations.

Meetings of Board and Board Committees

The Board and the respective Board Committees meet regularly to discuss strategy, operational and governance matters. Board and Board Committee meetings are scheduled prior to the start of each financial year in consultation with the Directors with a view to ensuring that all the Directors would be able to participate in the meetings. The Constitution of the Company (Constitution) also permits Directors to participate via audio or video conference.

The non-executive Directors, led by the Chairman, also set aside time at meetings to meet without the presence of Management and at other times when necessary.

Presentations and updates given at the Board meetings allow the Board to develop a good understanding of the progress of the Group's business as well as the issues and challenges facing the Group. Any risk management or other major issues that are relevant to the Company's performance or position are highlighted to the Board. Further, any material variance between any projections in budget or business plans and the actual results from business activities and operations is disclosed and explained to the Board. To keep the Board abreast of investors' concerns, feedback and perceptions, the Board receives regular updates on analyst estimates and views. This includes updates and analyses of the shareholder register, highlights of key shareholder engagements as well as market feedback and also promote active engagement between Board members and the key executives.

Through the meetings, the Board reviews, monitors and oversees the implementation of the Group's corporate strategy. The Board also meets at least annually to review and deliberate on strategy and strategic matters with Senior Management. The strategy meeting in FY 2020 was held in November 2020 during which the Board and Senior Management held in-depth discussions and the Board endorsed the Company's strategic direction and objectives.

The Company adopts and practises the principle of collective decision-making. The Board benefits from a culture of open, frank, rigorous and constructive discussions and debates at Board and Board Committee meetings which are conducted on a professional basis. There is mutual trust and respect among the Directors. The Board also benefits from the diversity in views, perspectives and expertise. No individual Director influences or dominates the decision-making process.

The Board is provided with relevant information on a timely basis prior to Board and Board Committee meetings. This enables Directors to make informed decisions to discharge their duties and responsibilities. In addition to receiving complete, adequate and timely information on Board affairs and issues requiring the Board's decision, the Board also receives information on an ongoing basis. Management provides the Board with ongoing reports relating to the operational and financial performance of the Company, as well as updates on market developments and trends.

As a general rule, Board papers are sent to Board or Board Committee members in advance of each each Board or Board Committee meeting, to allow them to prepare for the meetings and to enable discussions to focus on any questions or issues that they may have or identify. Where appropriate, Management briefs Directors in advance on issues to be discussed before the Board or Board Committee meeting. Agendas for Board and Board Committee meetings are prepared in consultation with and incorporates inputs from the Senior Management, the Chairman and the chairpersons of the respective Board Committees. This provides assurance that the important topics and issues will be covered. Half year and full year financial statements are reviewed and recommended by the AC to the Board for approval. In line with the Company's ongoing commitment to minimise paper waste and reduce its carbon footprint, the Company does not provide printed copies of Board papers. Instead, Directors are provided with tablet devices to enable them to access and review Board and Board Committee papers prior to and during meetings. This initiative also enhances information security as the papers are made available through an encrypted channel. Directors are also able to review and approve written resolutions using the tablet devices.

The deliberations and decisions taken at Board meetings are minuted. Notwithstanding the Company's adoption of semi-annual financial results reporting with effect from FY2020, the Board continues to meet on a quarterly basis.

The matters discussed at Board and Board Committee meetings are set out briefly in the table below.

The Board, whether as individual Directors or as a group, is also entitled to have access to independent professional advice where required, at the Company's expense.